One of the greatest assets of distributed hydrologic models like GSSHA is the ability to spatially distribute the parameters for processes, such as overland flow and infiltration, over the watershed. Assigning values, grid cell by grid cell, is tedious and makes all but the simplest and smallest models impossible. Using WMS, GIS coverages (layers) representing land use and soil texture can be used to assign model parameter values to groups of grid cells sharing the same characteristics.

The basic process of assigning spatially distributed parameters consists of the following steps:

The ability to locate and obtain relevant land use and soil texture data is an important part of assigning parameter values to a GSSHA simulation. The World Wide Web is an excellent resource for obtaining data and the WMS developers have created a web site summarizing the key nation-wide (US) data available for download. This web site, maintained at http://www.emrl.byu.edu/gsda, is updated on a periodic basis. It should be noted that the gsda web site references data sources that are maintained and distributed on a nation-wide basis. More accurate (higher resolution and more recent) data are often available from local government agencies and universities, so it is wise to check for alternative data sources.

Elevation data are essential for delineating the watershed and establishing the initial elevations in the finite difference grid. The gsda web site contains many excellent sources of elevation data throughout the United States and related territories. The WMS reference manual contains more detailed information on importing, displaying, and manipulating DEM data. Chapter 2 of this primer discusses the use of a DEM to delineate a watershed and establish the numerical grid.

The USGS provides land use classifications for the entire United States at 1:250,000 scale. These data are available from the USGS directly, but in a format called GIRAS, not directly readable by WMS. Arc/Info is required to convert the GIRAS data to a form useable by WMS. The Environmental Protection Agency (EPA), as part of the BASINS program, has converted the GIRAS files to ArcView shapefiles. These data can be downloaded from the EPA, as directed on the gsda web site, and used directly in WMS. A list of land use code descriptions can be read from the Appendix at the following USGS site:

A link to this location can also be found in the gsda web site.

The land use maps downloaded from the EPA site are organized by the USGS 1:250,000 maps. These maps are generally large relative to the size of the watershed being modeled and can tax WMS’s memory resources. There are now two methods for dealing with this problem.

First, WMS can now use ESRI's ArcObjects to natively read the shapefiles. The region of interest can then be selected and WMS will then convert only the selected data to the WMS internal format. For more information on this method, please refer to the WMS Help File.

For the second method of dealing with large data sets, it is suggested that you use ArcView or other GIS software to clip out the region of interest. For example: after delineating the basin as described in Chapter 2, export the basin boundary polygon as a shape file. You can then use the GeoProcessing extension within ArcView to clip out the land use that covers the area of interest. You can also simply make a bounding box that is bigger than the watershed and use it to clip out the desired data. The following lists some details for using ArcView to do this.

The STATSGO data have been compiled in ArcView shapefile format by watershed units (large basins) for distribution as part of the EPA BASINS program. Detailed information for downloading STATSGO data is provided on the gsda web site.

The NRCS also distributes the files on a state-by-state basis. The state files are very large. For many states the files are too big to read into WMS without clipping, as suggested in the Land Use section above. A secondary table containing various soil classification information must be joined to the polygons using ArcView prior to using in WMS. The name of this table is “comp.dbf” and should be joined with the polygons based on the MUID field name (present in both the feature attribute table of the polygons and the “comp.dbf” file).

The necessary details for using ArcView to process the soils data follows:

Always check for the availability of SSURGO data from local NRCS offices or other local agencies that disseminate GIS data. These data are often available near regions of higher population and land development and provide greater resolution of soil texture data.

WMS has an interface to create a soil index map based on soil textural classes. Once this index map is created WMS automatically reads in the values of infiltration parameters from Rawls and Brakensiek’s table which is hard-wired in WMS. These values are basically used for initial basic model set up and need to be refined during the process of calibration.

Mapping to the Grid

GIS coverages are used to assign spatially varying grid parameters by mapping the points, arcs, and polygons of a GIS coverage to an index map of unique land use, soil texture, or land use/soil texture IDs. A series of mapping tables that relate the parameter values of the IDs can then be developed. Assigning the GIS coverage IDs to the grid cells is accomplished by selecting the GIS coverage you wish to generate the index map from and then choosing the GIS data -> Selected Index button. Figures 9 and 10 illustrate how the IDs from a land use (or soil texture) coverage are mapped to the finite difference grid.

Once an index map has been created, the individual parameters are assigned for each ID (five in the example shown in Figures 6 and 7) through a mapping table, as described above. 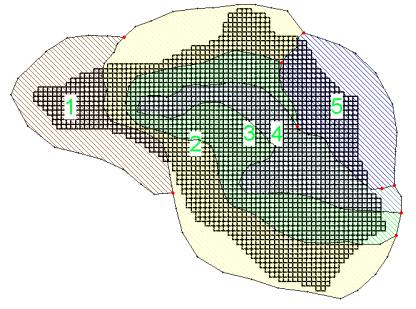 Figure 9. Polygon coverage overlaid on a finite difference grid. Five different polygons are shown, as classified by their ID numbers. These ID numbers can be mapped to an index map. Also, combinations of coverages, such as soil type and land use coverages, may be mapped to an index map, with a unique ID being created for each combination of polygons that cover a grid cell 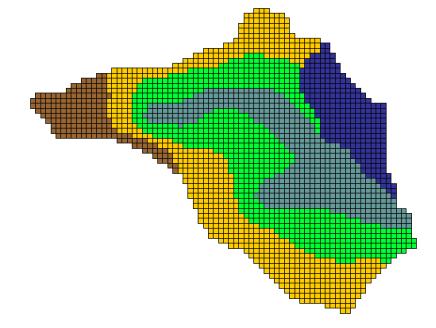 Figure 10. Polygon IDs from a coverage that has been mapped to the grid cells; the grid has been cell-fill colored according to the index map ID for each cell