While it is possible to manually create a finite difference grid and set the active and inactive regions, it is not recommended. Since the DEM (or other elevation data) will be used to assign elevations to the grid cells, it is good practice to use the elevation data to automatically create a watershed boundary. You can then use that boundary (a polygon, as shown in Figure 1) to construct a grid that covers the watershed extents and automatically assigns cells within the boundary as active, and cells beyond as inactive. 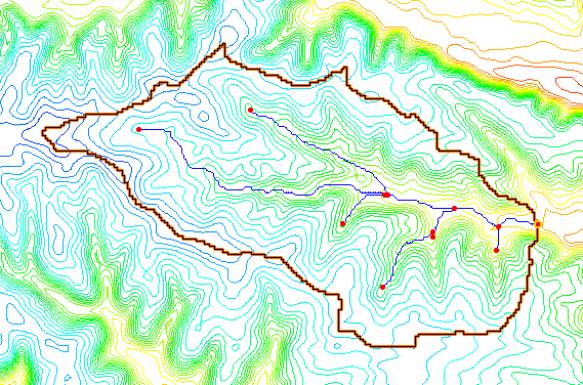 Figure 1. An automatically delineated watershed boundary through the use of a digital elevation file and the program TOPAZ. The streams shown were also automatically created by WMS

WMS provides three methods of automated watershed delineation, namely via DEMs, TINs, and feature objects. An overview of each is given here. A broader overview can be found in the WMS reference file under the Introduction chapter, with more detailed instructions in the individual chapters. The simplest and best way to create the watershed boundary is from the DEM. Additional methods can be employed if you do not have access to the required DEM data.

DEM data can be used in WMS to automatically delineate basin boundaries and define stream networks. Typically a USGS DEM (multiple quadrangles can be tiled together) is imported. Any gridded elevation data set can be used providing it is in one of the formats readable by WMS. The United States Department of Agriculture (USDA) program TOPAZ (Martz and Garbrecht 1992) is launched from WMS to define flow directions and flow accumulations for each DEM cell. This information is used to trace and convert the stream networks and basin boundaries to lines and polygons of the WMS drainage coverage. The polygon and stream network shown in the Figure 1 were delineated in WMS using this method. More details about basin delineation with DEMs can be found in the WMS help file (Nelson 2003).

Triangulated Irregular Networks (TINs) can also be used to delineate a watershed boundary that will be used for GSSHA models. A TIN is another form of elevation data, but rather than being organized as a grid, with rows and columns of elevations with equal spacing between, it is a network of triangles formed from scattered elevation points. TIN data are much less common than DEM data and slightly more complicated to work with. When using the TIN method for watershed delineation in WMS, you should convert the resulting boundaries and stream network to feature objects using the “Drainage Data-> Feature Objects command. Details on the use of TINs for automated watershed delineation can be found in the WMS help file.

If you have an existing watershed boundary and stream network already defined in a GIS or CAD environment, then it is possible to import these data in WMS as a drainage coverage and use the imported feature arcs directly to create the GSSHA grid and channel data. However, elevation data are still required to interpolate surface elevations to the resulting GSSHA grid. When using an existing watershed boundary, you should use caution because, unlike the DEM method where the boundaries and streams are defined directly from the elevations, the streams and boundary of the imported data may not coincide with the interpolated elevation data. This can result in elevation errors in overland flow grid cells and channel nodes, leading to numerical instability in the GSSHA model. The elevations in the resulting grid may need to be edited on a cell by cell basis. Further details on the use of feature objects are provided in the WMS Help File.