11.1.1 - Simulation of Constituents on the Overland Flow Plane

Constituents are simulated on the overland flow plane by including the OV_CON_TRANS card in the project file. The only way to specify parameter values for overland constituent transport is in the MAPPING_TABLE file. Details of the required MAPPING_TABLE inputs are specified in Section 12. The inputs required depend on the type of constituents selected for simulation. Constituents can be simple (first order) or NSM (full nutrient cycle).

Two types of reactive constituent transport are available in GSSHA. Constituents can be simulated as simple first order reactants with specified uptake rates from the soil and specified decay rates. The nutrient cycle can also be simulated with the Nutrient Simulation Model (NSM) (Johnson and Gerald, 2008). In either case, the overall simulation methods within the GSSHA model are the same. Only the rates of mass absorption and decay are different. It is therefore possible to simulate nutrients as simple constituents, as well as simulating them with the full nutrient cycle. It is up to the user to determine the appropriate level of chemical kinetics for the problem to be solved. More on both of these options is provided in subsequent sections.

In addition to reactions and transformations, contaminants on the overland flow plane are gained and lost due to:

More detail on the methods used in GSSHA are provided in Downer and Byrd (2007): TMDL TN

The concentration (g m3) of each constituent being simulated is constant throughout the simulation. The rainfall concentration is specified in the MAPPING_TABLE file. Rainfall inputs are added directly to the overland flow plane, where they may either infiltrate, or pond and produce contaminated runoff.

Contaminants on the overland flow plane can be considered in one of two ways. They can be considered to be laying on the soil surface, or they can be considered to be mixed in the soil column. The default is that contaminants are present on the soil surface. The amount of contaminants (Kg) is specified for each cell in the MAPPING_TABLE file. Then, the uptake coefficient (K) (m d-1), specified for simple constituents in the MAPPING_TABLE file and calculated for NSM, is used to move the contaminants into the overland flow based on the concentration deficit (solubility of the constituent and the concentration in solution). For simple constituents these parameters are specified in the MAPPING_TABLE file. For nutrients, these calculations are performed by the NSM. The flux (F) (g s-1) is computed as

Where Cmax is the maximum concentration (g m-3) of the contaminant (solubility), C is the concentration of contaminant in the ponded surface water, and A is the area of the computational grid cell (m2). The value 86400.0 converts the reaction rate (K) into (m s-1);

Constituents in the soil partition between the soil matrix and the pore water are based on the chemical properties, the soil properties, and the soil moisture. Constituent uptake into water ponded on the overland flow plane occurs due to the uptake rate (K) and the concentration difference between the soil pore water volume and the overland flow plane. As the concentration gradient may be in either direction, the flux may also be in either direction, i.e. the dispersive flux may be into the soil, acting as a sink for the overland plane. How constituents are treated in the soil column are discussed in detail below.

Some or all of the water ponded on the land surface may infiltrate, removing contaminants. Water that infiltrates is assumed to contain the same concentration of dissolved contaminants as the ponded water.

Values in the table are separated by spaces.

11.1.2 - Simulation of Constituents in the Channel Network

Transport of constituents within the channel network is calculated with the general 1-D advection-dispersion equation in terms of the mass of constituent (M) equal to the concentration (C) multiplied by the volume (V) with constant dispersion. The details of the equations are described in Downer and Byrd (2007). For the channels, the following sources/sinks are considered in addition to chemical reactions.

Point sources may be input into any node in the stream network. Point sources are defined by a constant discharge rate and concentration for each point source.

Figure 2 shows the conceptual model of the soil column transport model. Downward fluxes (infiltration, gravity drainage, groundwater recharge) are shown on the left. Upward fluxes (exfiltration, upward groundwater flux) are shown on the right. Diffusive exchange occurs between the top soil layer and the surface water. Exchange between pore water and soil particles occurs in every layer, as does decay and transformations. 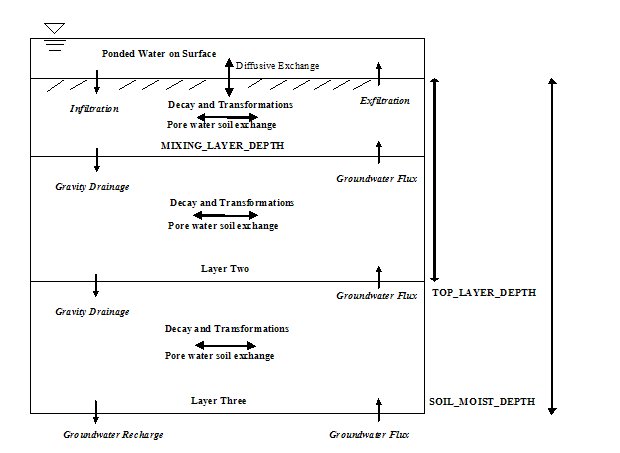 11.1.3.1 Distribution of Constituents in the Soil Column

Regardless of the total number of layers, the initial constituent loading specified in the MAPPING_TABLE is assumed to be mixed over the depth of the top layer. This mass of contaminants is distributed between an amount absorbed to the soil and dissolved in the pore water. The distributrition is calculated based on the chemical partition coefficient and the soil moisture as described by Johnson and Gerald (2007). For simple constituents, values of the partition coefficient are specified in the MAPPING_TABLE.

During the simulation, infiltration acts as a source to the top layer. Advection of water transfers water and constituents to lower layers. Leakage from the bottom layer is a sink for that layer. The concentration of constituent in the advected water depends on the mass of contaminant in the layer, the soil moisture, and the partition coefficient.

Exchange with water ponded on the land surface occurs due to the concentration gradient between the pore water in the top soil layer and the ponded water. The flux (F) (g s-1) is calculated as:

If exfiltration occurs, the groundwater is considered to come into the bottom layer, reach equillibrium condition in that layer and then move upward to the next layer, where it reaches equilibrium before being advected upward to the next layer, and ultimately to the land surface. The concentration reaching the land surface may not be the same as that specified for the groundwater in any given grid cell.